For more than 20 years now, the Oskar Patzelt Foundation has been committed to promoting and strengthening entrepreneurship and small and medium-sized businesses in Germany with the annual award of the "Großer Preis des Mittelstandes"...

...The aim of the award is to honour companies that are both economically successful and at the same time stand out through innovation and social and regional commitment. The "Großer Preis des Mittelstandes" is one of the most important economic awards in Germany and focuses on German small and medium-sized businesses as a significant pillar of the economy.

After our standardization by the Deutsche Bank AG Magdeburg and the achievement of the 2nd stage of the competition (jury list), we were invited to the award ceremony/award gala in the Dresdner Hotel Maritim on September 8, 2018. For the competition year 2018 a total of 4,917 small and medium-sized companies from 16 German states were nominated. Each federal state forms a so-called competition region, in which a maximum of three companies are honoured as prize winners and a maximum of five other companies as finalists.

We have made it and were chosen by 198 medium-sized companies from Saxony-Anhalt to be a finalist for the "Großer Preis des Mittelstandes 2018". 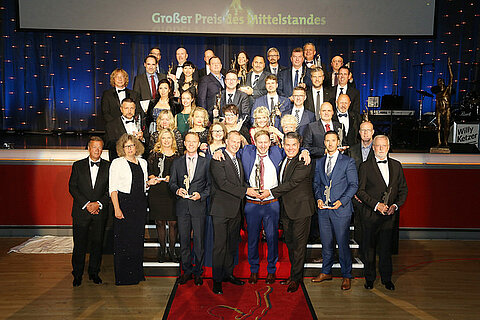 This honour reflects the success of the company, the outstanding performance of each individual employee and our united team effort. Only a strong team makes progress! We are delighted about the award and on behalf of Cybertrading GmbH would like to thank Deutsche Bank AG Magdeburg for the nomination, the Oskar Patzelt Foundation for the organisation of the competition and our employees, without whom success would not be possible in the first place. 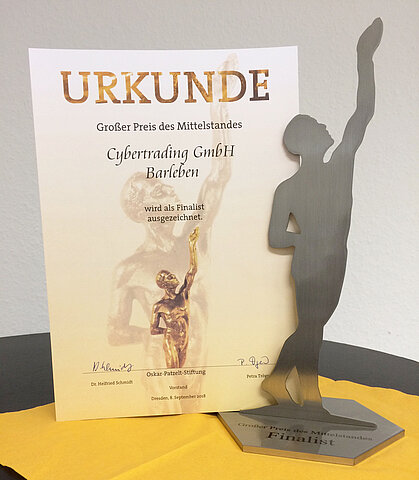